The most powerful passports in the world : Check here

Check here the most powerful passports in the world at Safalta.com.

As coronavirus-related border closures continue to be eased in 2022, many passport holders will have greater access to the world. Meanwhile, since Russia's February invasion of Ukraine, numerous countries have waived visa restrictions for Ukrainian passport holders. As a result, numerous nations have ceased providing Russian citizens visas and have prohibited Russian planes from accessing their airspace.Taking all of this into consideration, the UAE passport is currently the most powerful in the world, with visa-free or visa-on-arrival access to 174 countries. According to Arton Capital's Passport Index, a ranking of the world's passports in order of the number of destinations their holders can access without getting a visa prior to arrival, this makes it the strongest in the world. Unlike the Henley Passport Index, which ranked Japan first in 2022, Arton Capital's Passport Index updates its ranks in real time when new visa waivers and amendments are made, demonstrating the present implications of COVID-19 travel prohibitions and the war in Ukraine on global mobility.

The most powerful passports in the world

In 2022, Asian countries presently occupy the top three passport rankings, with Japan taking the top slot. Prior to the pandemic, European nations topped the rankings, indicating the region's continued reliance on COVID-19 and subsequent limitations.

Japanese nationals now have the most passport power, as they can access 193 countries without a visa or with a visa on arrival. South Korea and Singapore are tied for second place, with passports from both countries allowing citizens to travel freely to 192 countries.
Germany, which was formerly ranked second, is now in group three with Spain. In other news, Brexit has had a huge impact on the value of the British passport in recent years. The United Kingdom is presently ranked sixth in the world, alongside France, Ireland, and Portugal. According to the Passport Index, the UK was joint first in 2015, pre-referendum, with Germany.

The World's Most vs the least Powerful passports : According to the Henley Passport Index 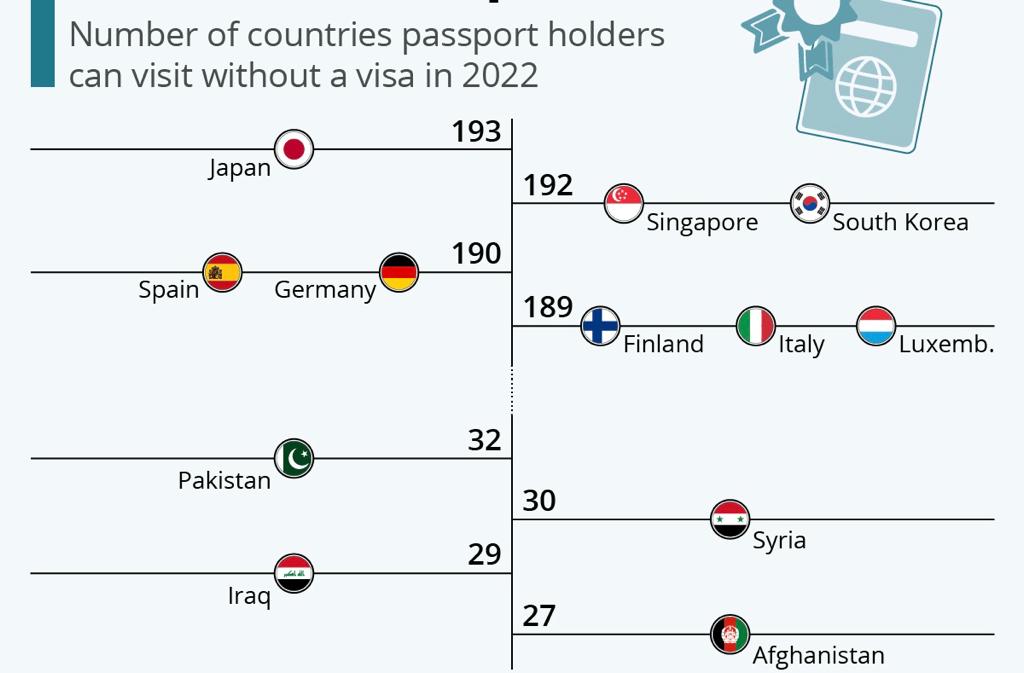 Strongest passports in the world 2022 : According to the Passport Index by Arton Capital

After accounting for COVID-19 and other travel restrictions, the following are the world's most powerful passports in 2022:

Afghanistan has retained its position as the Index's lowest-ranked country this year. Afghan people have unrestricted access to only 27 countries. Iraq and Syria are likewise placed 29th and 30th, respectively.