National Highways, which link India's northern, southern, eastern, and western regions, have evolved into the core of the country's road system. Check here to know about the longest highway.

Please fill the name
Please enter only 10 digit mobile number
Please select course
Please fill the email
It starts in Srinagar in the north and ends at Kanyakumari in the south. The NH 44 route was created by combining seven significant old-number national highways, including NH 1A, NH 1, NH 2, NH 3, NH 75, NH 26, and NH 7.

As is common knowledge, India has more than 200 national highways. The top 11 national highways in India, the cities they link to, and their distances are all listed below for your convenience. 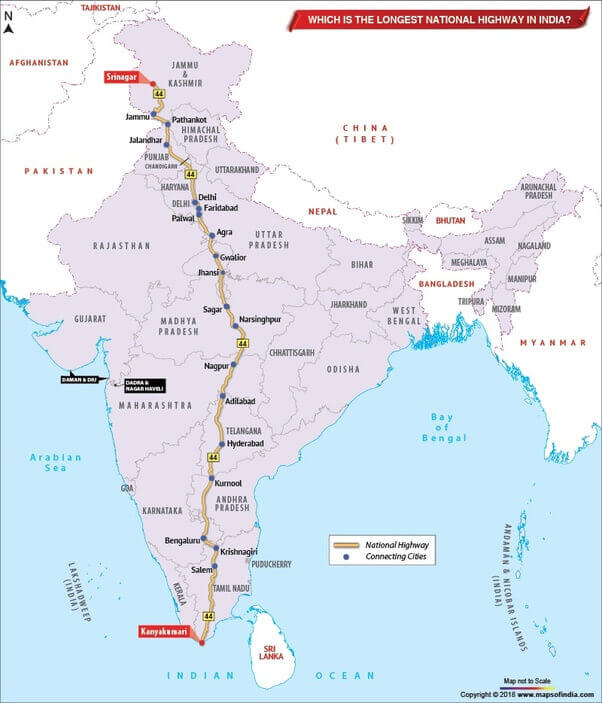 The Ministry of Road Transport and Highways is the owner of the network of trunk roads that make up India's national highways.

The National Highways Authority of India (NHAI), the National Highways and Infrastructure Development Corporation (NHIDCL), and the public works departments (PWD) of state governments are responsible for building and maintaining it. As of April 2019, India had 142,126 kilometers (88,313 mi) of national highways. All of India's major cities are connected by national highways running from north to south, east to west. Golden Quadrilateral exists in India (GQ). GQ is a national highway system that links India's principal economic, agricultural, and cultural hubs. It creates a quadrilateral that connects Delhi (north), Kolkata (east), Mumbai (west), and Chennai, India's four largest metropolises (south).

Facts about the longest Highway

What was the longest roadway in India known by in the past?

The longest national highway in India was once known as NH 7.

What does each hue represent in National Highways?

The colour scheme for national highways is yellow and white. State roads are painted in green and white. For city highways, use black and white.

Which Indian national highway is the shortest?

The answer is that NH 118 and NH 548 are the two shortest interstates in India.
blog