Here is the information about NCERT Class 12 Books Biology Chapter 15. You can give a read to this blog and get PDFs of the subject.

If you take NCERT Books as references for the examinations, you would appreciate your decision as most of the questions that appear in board exams are from these books.

Please fill the name
Please enter only 10 digit mobile number
Please select course
Please fill the email
Something went wrong!
Download App & Start Learning
You can keep the digital form of the book handy and learn from it without any time constraints.

You can access FREE E-BOOKS  at Safalta to prepare yourself for your examinations and test your knowledge. These books are not just free of cost, but they are also packed with ample knowledge and information related to your studies.

Here, you can learn the NCERT Class 12 Books Biology Chapter 15- Ecosystem. Moreover, you can get the links for other Chapter 15 to download the links.

If an alien from a distant galaxy were to visit our planet Earth, the first thing that would amaze and baffle him would most probably be the enormous diversity of life that he would encounter. Even for humans, the rich variety of living organisms with which they share this planet never ceases to astonish and fascinate us. The common man would find it hard to believe that there are more than 20,000 species of ants, 3,00,000 species of beetles, 28,000 species of fishes and nearly 20,000 species of orchids. Ecologists and evolutionary biologists have been trying to understand the significance of such diversity by asking important questions–

Why are there so many species? Did such great diversity exist throughout earth’s history? How did this diversification come about? How and why is this diversity important to the biosphere? Would it function any differently if the diversity was much less? How do humans benefit from the diversity of life?

In our biosphere immense diversity (or heterogeneity) exists not only at the species level but at all levels of biological organisation ranging from macromolecules within cells to biomes.

Biodiversity is the term popularised by the sociobiologist Edward Wilson to describe the combined diversity at all the levels of biological organisation. The most important of them are–

(i) Genetic diversity: A single species might show high diversity at the genetic level over its distributional range. The genetic variation shown by the medicinal plant Rauwolfia vomitoria growing in different Himalayan ranges might be in terms of the potency and concentration of the active chemical (reserpine) that the plant produces. India has more than 50,000 genetically different strains of rice, and 1,000 varieties of mango.

(iii) Ecological diversity: At the ecosystem level, India, for instance, with its deserts, rain forests, mangroves, coral reefs, wetlands, estuaries, and alpine meadows has a greater ecosystem diversity than a Scandinavian country like Norway.

It has taken millions of years of evolution, to accumulate this rich diversity in nature, but we could lose all that wealth in less than two centuries if the present rates of species losses continue. Biodiversity and its conservation are now vital environmental issues of international concern as more and more people around the world begin to realise the critical importance of biodiversity for our survival and well- being on this planet.

15.1.1 How Many Species are there on Earth and How Many in India?

Since there are published records of all the species discovered and named, we know how many species in all have been recorded so far, but it is not easy to answer the question of how many species there are on earth. According to the International Union for Conservation of Nature and Natural Resources (IUCN) (2004), the total number of plant and animal species described so far is slightly more than 1.5 million, but we have no clear idea of how many species are yet to be discovered and described. Estimates vary widely and many of them are only educated guesses. For many taxonomic groups, species inventories are more complete in temperate than in tropical countries. Considering that an overwhelmingly large proportion of the species waiting to be discovered are in the tropics, biologists make a statistical comparison of the temperate-tropical species richness of an exhaustively studied group of insects and extrapolate this ratio to other groups of animals and plants to come up with a gross estimate of the total number of species on earth. Some extreme estimates range from 20 to 50 million, but a more conservative and scientifically sound estimate made by Robert May places the global species diversity at about 7 million.

Let us look at some interesting aspects about earth’s biodiversity based on the currently available species inventories. More than 70 per cent of all the species recorded are animals, while plants (including algae, fungi, bryophytes, gymnosperms and angiosperms) comprise no more than 22 per cent of the total. Among animals, insects are the most species-rich taxonomic group, making up more than 70 per cent of the total. That means, out of every 10 animals on this planet, 7 are insects. Again, how do we explain this enormous diversification of insects? The number of fungi species in the world is more than the combined total of the species of fishes, amphibians, reptiles and mammals. In Figure 15.1, biodiversity is depicted showing species number of major taxa.

It should be noted that these estimates do not give any figures for prokaryotes. Biologists are not sure about how many prokaryotic species there might be. The problem is that conventional taxonomic methods are not suitable for identifying microbial species and many species are simply not culturable under laboratory conditions. If we accept biochemical or molecular criteria for delineating species for this group, then their diversity alone might run into millions.

Although India has only 2.4 per cent of the world’s land area, its share of the global species diversity is an impressive 8.1 per cent. That is what makes our country one of the 12 mega diversity countries of the world. Nearly 45,000 species of plants and twice as many of animals have been recorded from India. How many living species are actually there waiting to be discovered and named? If we accept May’s global estimates, only 22 per cent of the total species have been recorded so far. Applying this proportion to India’s diversity figures, we estimate that there are probably more than 1,00,000 plant species and more than 3,00,000 animal species yet to be discovered and described. Would we ever be able to complete the inventory of the biological wealth of our country? Consider the immense trained manpower (taxonomists) and the time required to complete the job. The situation appears more hopeless when we realise that a large fraction of these species faces the threat of becoming extinct even before we discover them. Nature’s biological library is burning even before we catalogued the titles of all the books stocked there. 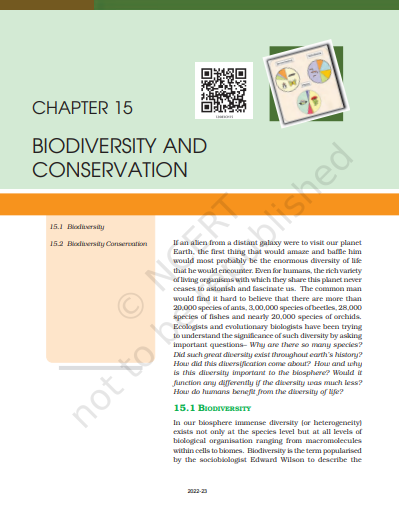 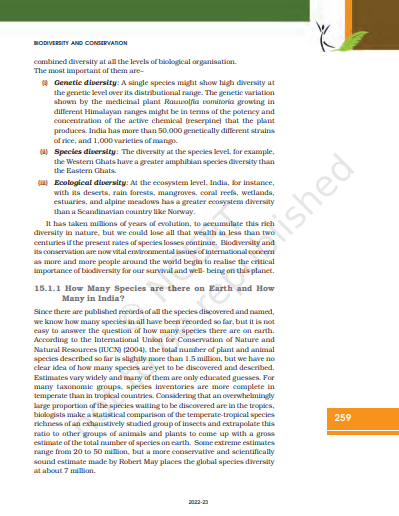 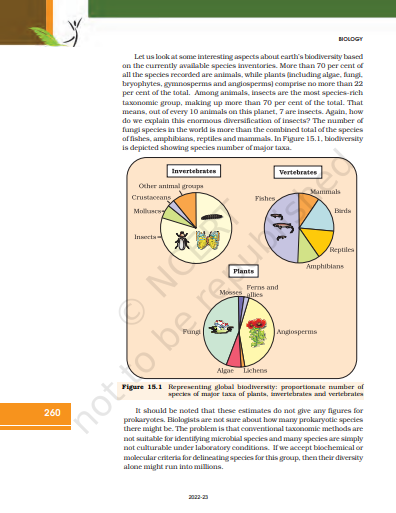 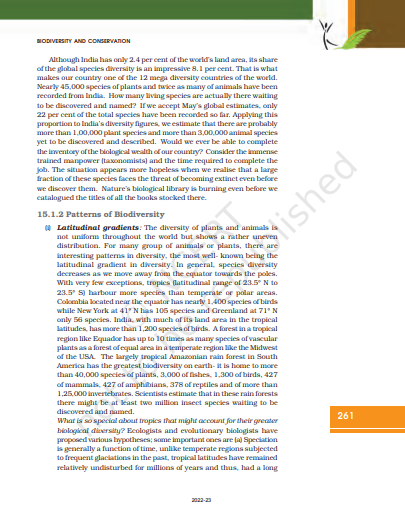 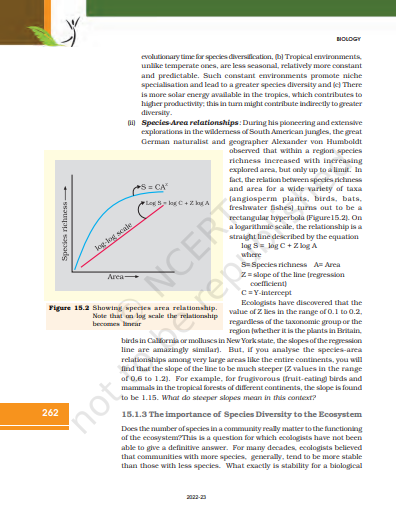 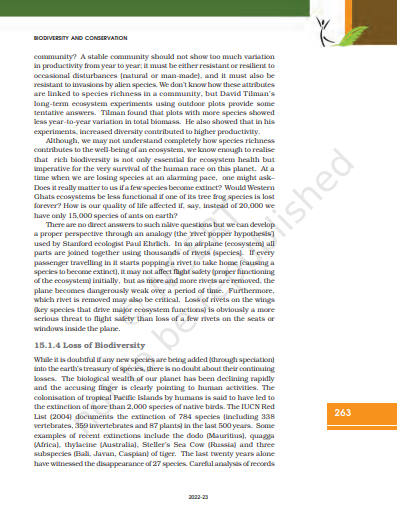 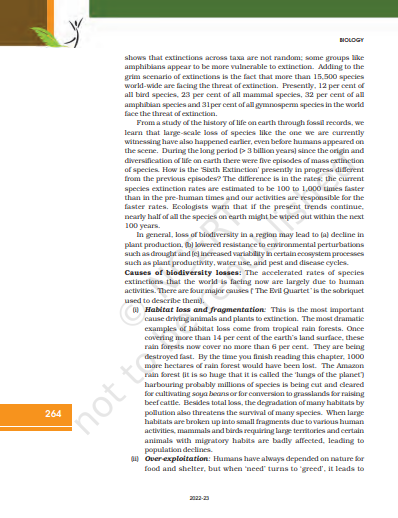 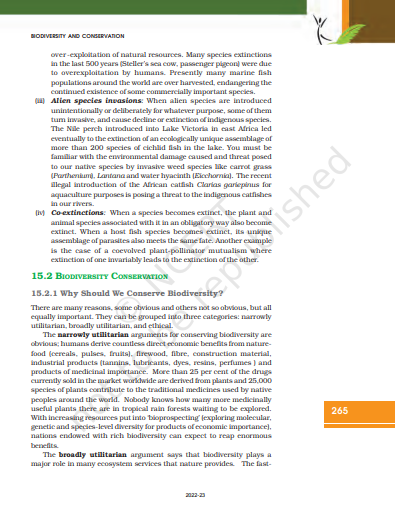 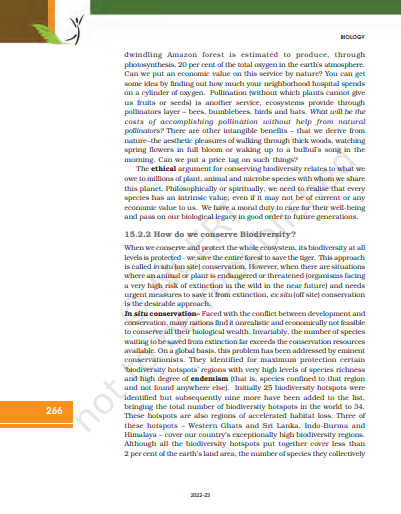 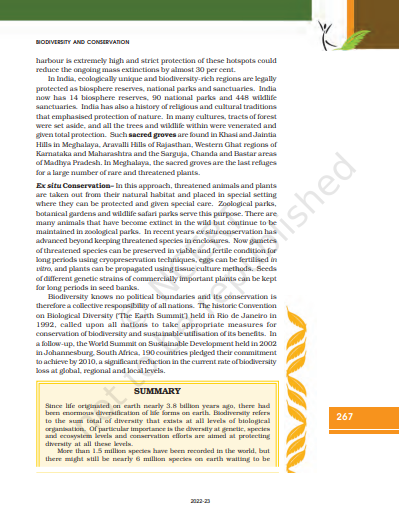 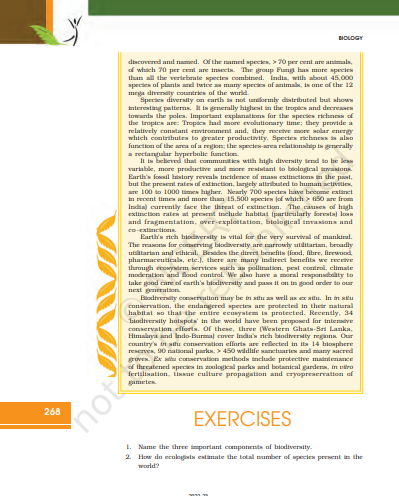 Safalta provides the latest NCERT course books for all the major subjects of Class 12. A team of proficient teachers drafts these matters in a precise and thorough manner. You can download the PDFs for all the subjects in a Chapter 15-wise format.

These Books are very effective in preparing for annual exams. Here is the PDF for NCERT Class 12 Books Biology Chapter 15- Ecosystem.

Where can you download NCERT Class 12 Books Biology Chapter 15 PDF?

Candidates can download NCERT Class 12 Books Biology Chapter 15- Ecosystem PDF for free on our page. Links are given below.

What topics are covered in NCERT Class 12 biology Chapter `15?

Topics covered in the Class 12 biology Chapter 15 are-

Why should students study from NCERT Books Class 12 Biology for board exams?

Why are CBSE Books for Class 12 Biology so important?

The Chapter 15 in CBSE Books for Class 12 Biology is vital for board exams and higher classes. Students should read the Unit given in the CBSE books for Class 12 Science. These stories and practice questions can help gain excellent marks.