Here is the information about NCERT Class 12 Books English Vistas Chapter 7. You can give a read to this blog and get PDFs of the subject.

Students studying in CBSE Class 12 can access NCERT Class 12 Books English Vistas Chapter 7- Evans Tries An O-Level here. It is PDF format. You can download the PDF for and learn from the book anytime you want.

Students who are studying in Class 12 and candidates who are preparing for competitive exams can download the PDF for NCERT Class 12 Books English Vistas Chapter 7- Evans Tries An O- Level to learn from the reading material.

If you take NCERT Books as references for the examinations, you would appreciate your decision as most of the questions that appear in board exams are from these books. You can keep the digital form of the book handy and learn from it without any time constraints.

You can access FREE E-BOOKS  at Safalta to prepare yourself for your examinations and test your knowledge.

Here, you can learn the NCERT Class 12 Books English Vistas Chapter 7- Evans Tries An O-Level. Moreover, you can get the links for other Chapter 7 to download the links.

The Chapter summary is-


The protagonist of this tale is Evan, commonly known as "The Break." He earned this moniker because he was skilled at eluding capture. However, it was challenging to pull off such antics because Evans had now been taken to Oxford prison. Oxford prison has staff members that were extremely strict.

Should criminals in prison be given the opportunity of learning and education?

Dramatis Personae All precautions have been taken to see to it that the O-level German examination arranged in the prison for Evans does not provide him with any means of escape.

Just the one fellow, you say?”

He was the only one in the class, so you can say he’s had individual tuition all the time, really. Would have cost him a packet if he’d been outside.”

“That’s jolly kind of you. What exactly’s the procedure now?”

“Oh, don’t worry about that. I’ll be sending you all the forms and stuff. What’s his name, you say? Evans?”
“James Roderick Evans.” It sounded rather grand.
“Just one thing, Governor. He’s not a violent sort of fellow, is he? I don’t want to know his criminal record or anything like that, but — ”
“No. There’s no record of violence. Quite a pleasant sort of chap, they tell me. Bit of a card, really. One of the stars at the Christmas concert. Imitations, you know the sort of thing: Mike Yarwood stuff. No, he’s just a congenital kleptomaniac, that’s all.” The Governor was tempted to add something else, but he thought better of it. He’d look after that particular side of things himself.

“Presumably,” said the Secretary, “you can arrange a room where — ”

“No problem. He’s in a cell on his own. If you’ve no objections, he can sit the exam in there.”

“That’s fine.”
And we could easily get one of the parsons from St. Mary Mags to invigilate, if that’s — ”
“Fine, yes. They seem to have a lot of parsons there, don’t they?” The two men chuckled good-naturedly, and the Secretary had a final thought. “At least there’s one thing. You shouldn’t have much trouble keeping him incommunicado, should you?”
The Governor chuckled politely once more, reiterated his thanks, and slowly cradled the phone. Evans!

“Evans the Break” as the prison officers called him. Thrice he’d escaped from prison, and but for the recent wave of unrest in the maximum-security establishments up north, he wouldn’t now be gracing the Governor’s premises in Oxford; and the Governor was going to make absolutely certain that he wouldn’t be disgracing them. Not that Evans was a real burden: just a persistent, nagging presence. He’d be all right in Oxford, though: the Governor would see to that — would see to it personally. And besides, there was just a possibility that Evans was genuinely interested in O-level German. Just a slight possibility. Just a very slight possibility. At 8.30 p.m. on Monday 7 June, Evans’s German teacher shook him by the hand in the heavily guarded Recreational Block, just across from D Wing.


Glipses of the Chapter are- 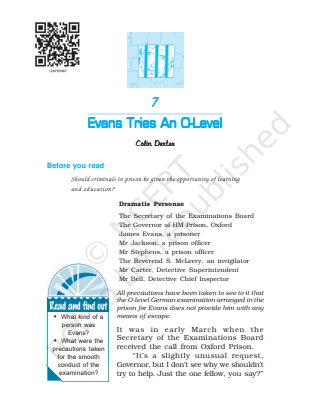 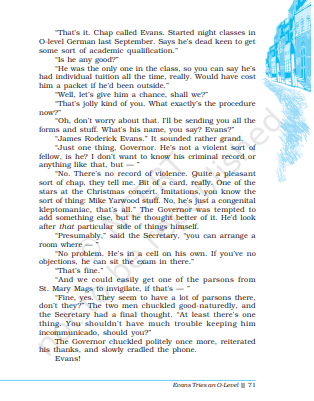 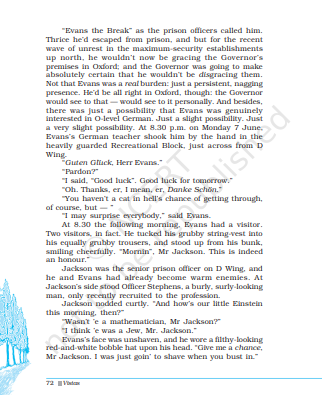 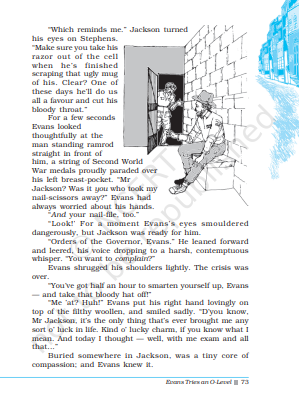 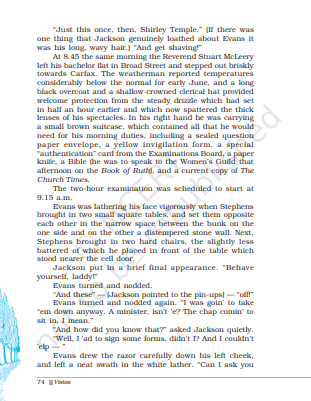 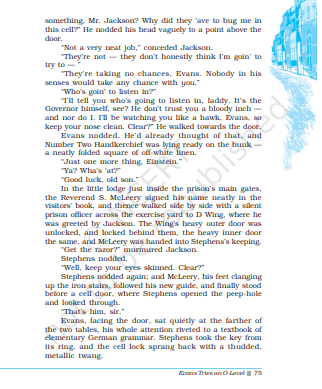 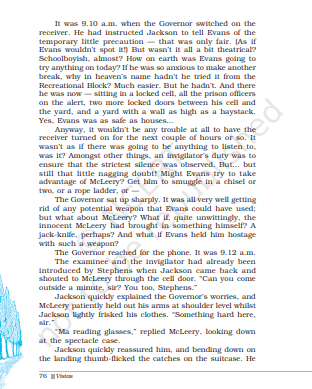 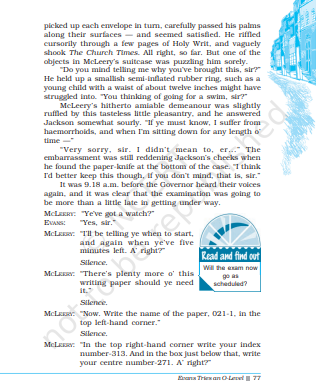 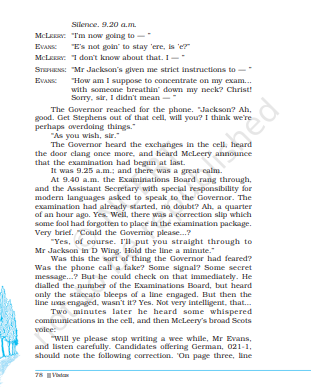 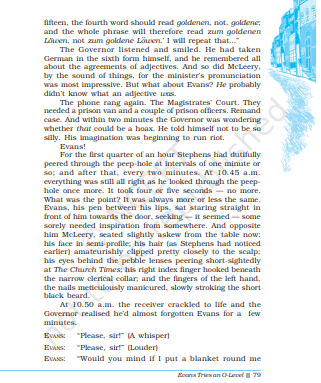 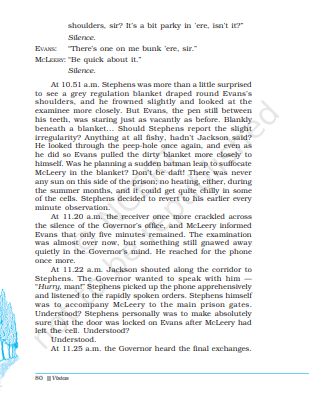 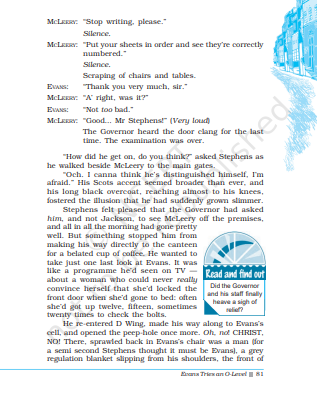 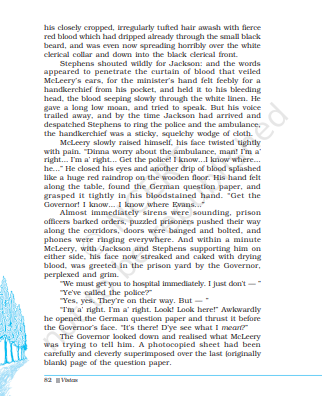 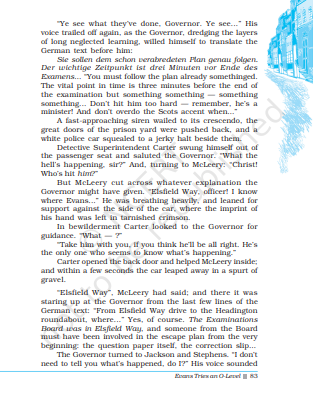 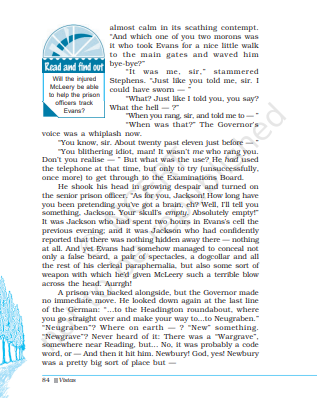 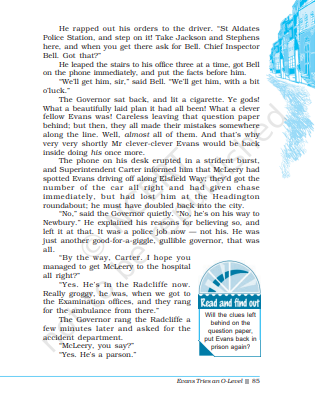 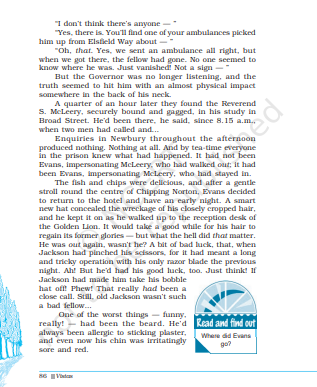 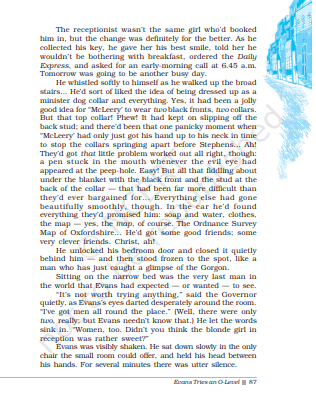 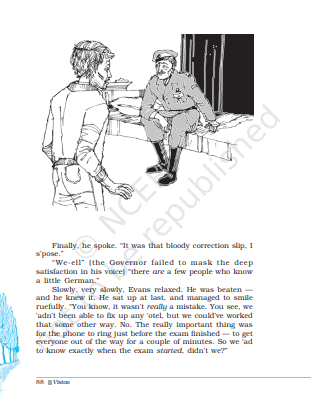 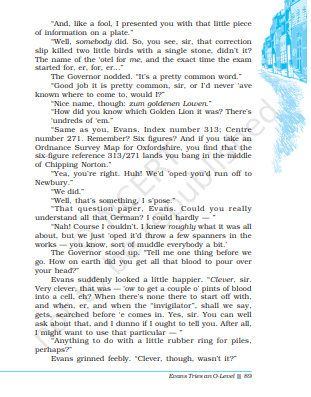 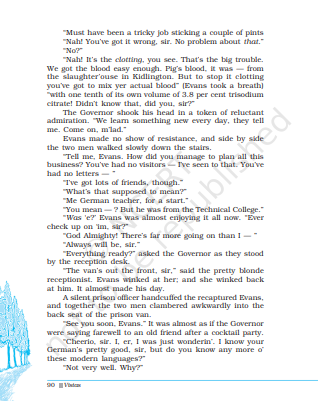 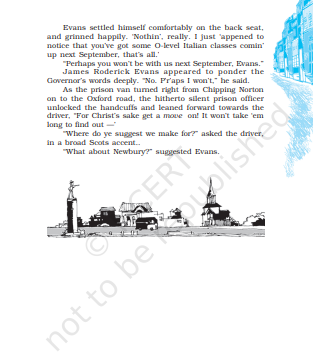 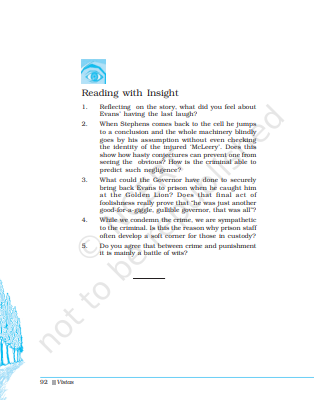 Safalta provides the latest NCERT course books for all the major subjects of Class 12. A team of proficient teachers drafts these matters in a precise and thorough manner. You can download the PDFs for all the subjects in a Chapter 7-wise format.

These Books are very effective in preparing for annual exams. Here is the PDF for NCERT Class 12 Books English Vistas Chapter 7- Evans Tries An O Level.

Where can you download 'Evans Tries An O-Level' PDF?

Candidates can download NCERT Class 12 Books English Vistas Chapter 7- Evans Tries An O-Level PDF for free on our page. Links are given below.

What is the story of 'Evans Tries An O Level'

The protagonist of this tale is Evan, commonly known as "The Break." He earned this moniker because he was skilled at eluding capture. However, it was challenging to pull off such antics because Evans had now been taken to Oxford prison. Oxford prison has staff members that were extremely strict.

Why should students study from NCERT Books Class 12 English for board exams?

Almost all the questions that appear in board exams are from NCERT Books Class 12 English. Moreover, a team of professional teachers drafts these books, which become a reliable source of study for students.