NDA/NA 2 2021 has been postponed by UPSC and candidates can also change their exam centres now. Check all the details here at Safalta.com.

Candidates who have applied for NDA/NA (II) 2021 will be able to make the changes about the exam centre till June 29, 2021. The notice released by UPSC is as follows: 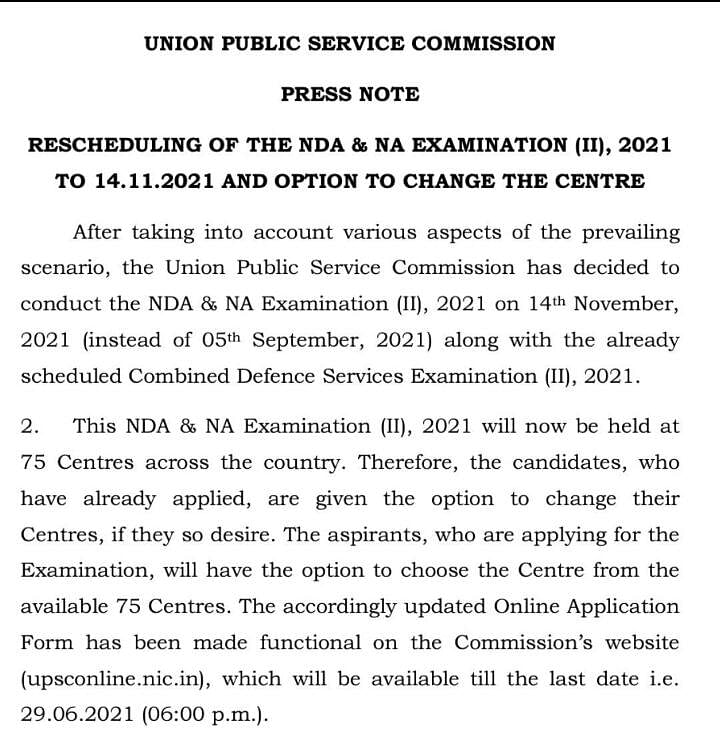 National Defence Academy (NDA) Exam 2021 is a National level exam organized by Union Public Service Commission UPSC to recruit candidates in Army, Navy, and Air Force. It is conducted twice every year and the exams are NDA 1 and NDA 2. NDA conducts its exam in two stages i.e Written exam and an SSB interview. The exam is conducted for admission to Army, Navy, and Air Force wings of NDA and Indian Naval Academy Course (INAC), and more than 4 lakh aspirants appear for the NDA exam every year, out of which approximately 6000 qualified candidates are called for SSB Interview. A list of the candidates is prepared who have qualified for the written exam by UPSC Hence the candidates who are on the list are called for SSB Interview for Intelligence and Personality Test.

Union Public Service Commission (UPSC) holds a national level exam twice a year called the National Defence Academy (NDA). Here you may find the most recent NDA news. On December 30, 2020, the official notification for the NDA I exam was released. The formal notification for NDA II 2021, on the other hand, is likely to be released on June 9, 2021.

As you have read about what NDA then follows the article for more information about NDA.

The dates of NDA I and II exams had been announced through UPSC.


As you are well versed with the pattern syllabus and interview process let's concentrate on clearing the exam in the first attempt.

Part B- General Knowledge - The Maximum Marks are 400

Below is the complete syllabus of different exams. Candidates have to prepare almost every topic to qualify the test.

To apply for NDA, candidates must be:

1) A citizen of India or

2) A subject of Nepal or

3) A subject of Bhutan

4) A Tibetan refugee who came over to India before January 1, 1962, intending to permanently settle in India or

5) A person originally Indian who has migrated from Pakistan, Burma, Sri Lanka and East African Countries of Kenya, Uganda, the United Republic of Tanzania, Zambia, Malawi, Zaire and Ethiopia or Vietnam intending to permanently settle in India

Provided that a candidate belonging to categories 2, 3, 4 and 5 shall be a person in whose favour a certificate of eligibility has been issued by the Indian government.

Certificate of eligibility will not, however, be necessary in case of candidates who are Gorkha subjects of Nepal.

The educational qualification prescribed for admission to the different academies is given below:

According to the physical standards for NDA, exam candidates must be physically fit

The minimum height prescribed is 157 cms  (For the Air Force it is 162.5 cms). Certain exceptions are applicable for candidates based on the region from where they belong.

Height and Weight requirements for Navy

Candidates must not suffer from any of the following minor conditions

Candidates must not have the following diseases:

Any of the following conditions will disqualify the applicant Armed Forces:

To clear the SSB interview the candidates require 80% mental efforts and 20% physical efforts. The interview conducting body always looks for officer-like qualities in a  candidate i.e suitable personality, approach towards solving a real-time problem and attitude towards your goals & life. SSB interview is not a one day process but a 5-days process, which is of very long duration.

The day-wise SSB interview process is explained below.

In the OIR test, candidates are given a set of 50 questions based on Quantitative Aptitude and Verbal & Non-verbal Reasoning. The time given to solve these questions will be 30 minutes. After that in PPDT, candidates will be shown a static picture on the projector for 30 seconds and they have to come up with a thoughtful story based on your perception. The candidates who do not perform well are sent back on the very first day.

On this day, the candidate is called for psychological testing.

WAT (Word Association Test) - this test is to determine the candidate’s psychology. Candidates will be shown 60 words on a projector consecutively and they have to associate these words with some positive events.

SRT (Situation Reaction Test) - SRT is conducted after WAT and 10 minutes will be given to the candidate for answering these questions. The total number of questions will be 60 and the candidates have to write 2-3 sentences in each situation.

On the third and fourth day of the interview, GTO tasks are done to determine the suitable candidate. The Group Testing Officer (GTO) is the most powerful person in the SSB interview because he will spend 2 days testing your abilities. GTO testing comprises the following tasks-

Group Discussion (GD) –  the group will be given two topics for discussion.

Group Planning Exercise (GPE) – this test will consist of 5 parts.

-      10 minutes for writing your individual plan

Progressive Group Task (PGT)- PGT is a set of obstacles in a specified area in which the team members need to cross each obstacle complying with certain rules and regulations. The difficulty level of this task increases after every obstacle.

Group Obstacle Race- This is also known as snake race. The group has to take part in a race of six obstacles. Here, the Group Testing Officer GTO wants to see the co-operation and team-leading quality in you.

Half Group Task (HGT) – HGT is almost similar to PGT, but the group is divided into two parts. Here, the Group Testing Officer wants to see the individual performance of the candidate. The rules for HGT will be the same as in PGT.

Lecturette- In this round, each candidate will be given 3 minutes to deliver a speech in front of the group. Scores depend upon your expressions, body language, fluency, confidence, and the knowledge you have.

Command Task- this round is to find the commanding ability in a candidate and is conducted before the FGT. The candidates are allowed to choose any two members out of the group that you have been allotted. This task is like PGT and HGT.

Final Group Task (FGT)- this is the final task in testing. All group members are required to finish this task and all rules remain the same as in PGT and HGT. This task is tougher and time taking

Day 5: This is the D-day of the SSB interview. On this day, the candidate is called for the conference for verification by the panel and after this, results are announced.

Note: A personal interview round is also organized on any day between second to the fourth day. The interviewing officers are a top senior officer like Colonel or Brigadier. Personal Interview is an integral part of the SSB interview process in which the details in PIQ (Personal Information Questionnaire) form are matched with your personality so they need to be correct.

The NDA exam is also the toughest of all. Hence, start your preparation now.

Enroll for online coaching for NDA  and get the guidance from the best faculty who not only teaches you but guides you personally.

What do you get in the online course for NDA 2021

Read anywhere any time with Safalta.