The CBSE Syllabus is very important in assisting students in creating an efficient study schedule. For the 2022–2023 school year, the Central Board of Secondary Education (CBSE) has issued the class 12 revised syllabus. Studying the entire Physics can be daunting for students due to its complex numerical questions, theories and concepts. Therefore, to make it simpler and easier for you Safalta has taken an initiative and launched Safalta School Online where learning never stops. It offers a class 9 to class 12 online courses.

Get clarity on each concept and learn everything from scratch.

Test Your preparation level with our FREE MOCK TEST SERIES

The CBSE Class 12 Physics Revised Syllabus is available below for students to view and download in PDF format. The theoretical paper and practical examinations' course structure are described in full in this curriculum. Students must adhere to this most recent syllabus and only study the chapters and subjects that are specified, avoiding the material that has been discontinued for the current academic year. 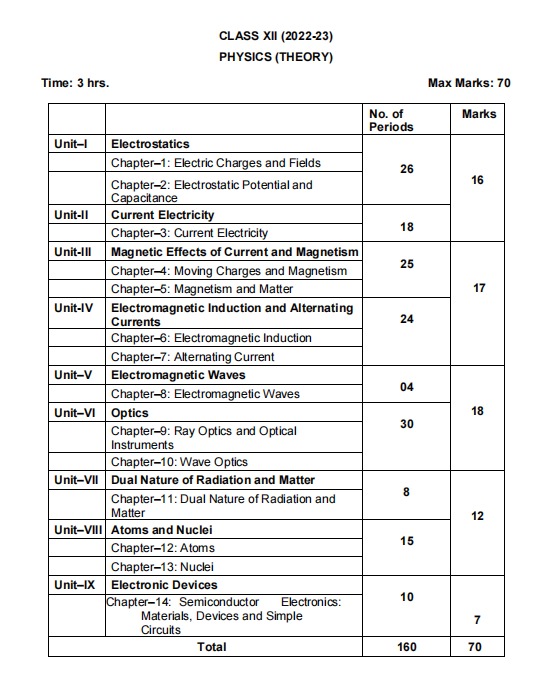 Conductors and insulators, free charges and bound charges inside a conductor. Dielectrics and electric polarization, capacitors and capacitance, combination of capacitors in series and in parallel, capacitance of a parallel plate capacitor with and without dielectric medium between the plates, energy stored in a capacitor (no derivation, formulae only).

cell, potential difference and emf of a cell, combination of cells in series and in parallel, Kirchhoff's rules, Wheatstone bridge.

The record to be submitted by the students at the time of their annual examination has to include: