Electric Charge and Static Electricity, Learn where these concepts are used and how

Here is important and relevant information regarding Class 12 Physics Concept of Electric Charge and Static Electricity? Read the article to learn about the same.

Electric Charge and Static Electricity: Have you ever experienced an unexpected and aching electricity jolt when somebody brushes your arm? Actually, you should try this. Switch off the lights and brush your clothes with the woollen blanket. The sparks that will emerge out of this phenomenon will astonish you. This phenomenon is responsible for all the lightning strikes on our planet paraphrase this line. This is called Static Electricity.

Please fill the name
Please enter only 10 digit mobile number
Please select course
Please fill the email
Something went wrong!
Download App & Start Learning
Static Electricity can be a nuisance or even a threat. The energy that causes your hair to stay erect when you rub it on the comb can also annihilate electronic gadgets and cause explosions. To understand what is static electricity and its aspects, we first need to dive into the fundamentals of atoms and electric charge. This blog will help you understand the Class 12 Physics concept of Electric Charges and Static Electricity, Protons, Electrons, Neutron,and their nature.

Table of Content
At safalta, you can access FREE E-BOOKS. These books are not just free of cost, but they are also packed with ample knowledge and information related to your studies.

Atoms are the smallest unit of any matter. Whatever surrounds you, whether it is big or small, is composed of an atom.

You can divide a matter into two many segments until a time comes when it cannot be divided; that part is what we call an atom. An atom contains electrons, protons, and neutrons. Out of these three elements, proton and electron serve the definition of electric charge. Protons are positively charged, while on the other hand, electrons are negatively charged. Neutrons remain neutral. A widely held atom mass is concentrated in a very small area in the center (middle) called the nucleus. Electrons orbit around this heavy nucleus.

Electrons are loosely held if we compare them to protons. As a result, the movement of charges will be limited to the movement of electrons. We know atoms are composed of electrons and protons. Therefore, it can be said that all matter is formed by electric charge. The charge of an electron equalizes the strength of the charge of an electron. When the number of protons and electrons equalizes each other in an atom, the atom is left with no overall, becoming neutral.

Static Electricity refers to unevenness between the electric charges in the body, particularly the imbalance between the positive and negative charges in the body. Physical features cause this imbalance in the positive and negative charges. Contact between solid matter is one of the most frequent causes of static electricity. It is assumed that the movement of protons is not possible. These are the electrons that move in static electricity.

Electrons are very loosely held in matters. This reflects that a simple contact such as rubbing can also make them get exchanged. 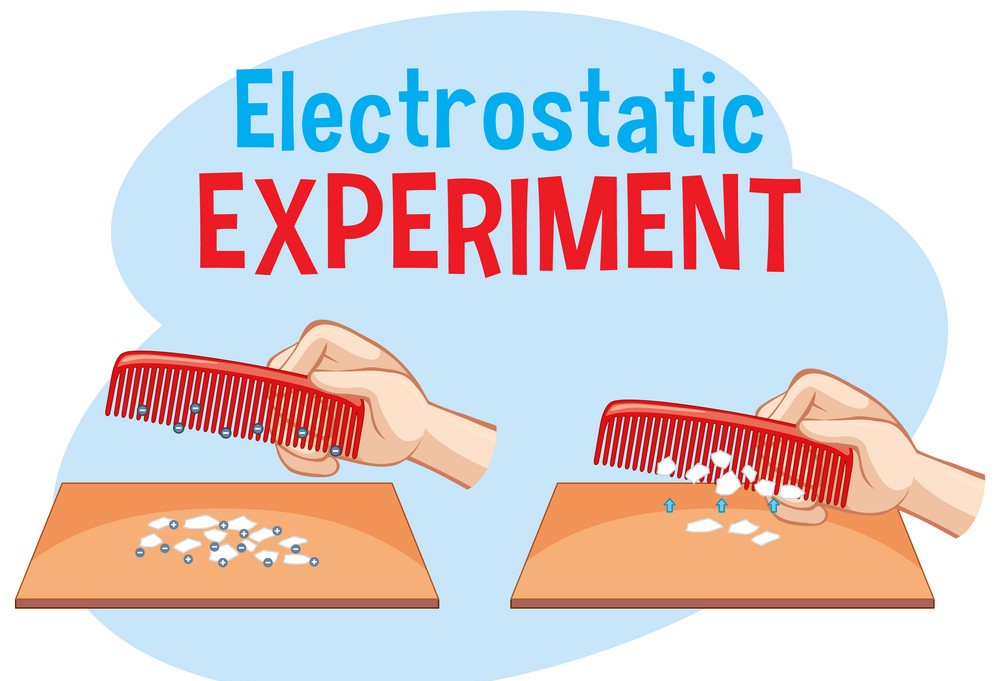 When we rub two materials together to produce static electricity, one item loses electrons and becomes more positively charged, while on the other hand, the other material gathers the electrons and turns negatively charged. We should understand that the notions like unlike charge attract and like charges repel are applicable here.

Have you noticed when your hair stands out when you remove your cap from your head? If not, recall it now. You can do it as well. Static Electricity is produced here too. It happens like this; when we take out the cap from our head, the electrons are transferred from cap to hair, making your hair stand out.
Remember that materials with the same charge resist each other. This is what happens in this case. As they have the same charges, your hairs make efforts to repel each other as far they can.

The same happens when you rub a comb with your hair repeatedly. Moreover, you may also definitely rubbed the comb on your hair and then to the pieces of paper with a comb and become amazed by the attraction of paper towards the comb. The comb loses electrons when rubbed with hairs. This imbalance of electric charges produces static electricity and makes the comb attracts the pieces of paper.
Read More

Candidates can refer to the information given in the blog to learn about Electric Charges and Static Electricity.

How are electric charges divided?

What is the positive electric charge called?

What is the negative electric charge called?

What is an electric charge?

The electric charge is the fundamental property of any matter that causes it to undergo a force when exposed to an electric or magnetic field.

What is Static Electricity?