Here is the information about NCERT Class 12 Books Biology Chapter 11. You can give a read to this blog and get PDFs of the subject.

Here, you can learn the NCERT Class 12 Books Biology Chapter 11- Biotechnology: Principles and Processes. Moreover, you can get the links for other Chapter 11s to download the links.

Biotechnology deals with techniques of using live organisms or enzymes from organisms to produce products and processes useful to humans. In this sense, making curd, bread or wine, which are all microbe-mediated processes, could also be thought as a form of biotechnology. However, it is used in a restricted sense today, to refer to such of those processes which use genetically modified organisms to achieve the same on a larger scale. Further, many other processes/techniques are also included under biotechnology. For example, in vitro fertilisation leading to a ‘test-tube’ baby, synthesising a gene and using it, developing a DNA vaccine or correcting a defective gene, are all part of biotechnology.

The European Federation of Biotechnology (EFB) has given a definition of biotechnology that encompasses both traditional view and modern molecular biotechnology.

The definition given by EFB is as follows: ‘The integration of natural science and organisms, cells, parts thereof, and molecular analogues for products and services’.

Among many, the two core techniques that enabled birth of modern biotechnology are :

(i) Genetic engineering : Techniques to alter the chemistry of genetic material (DNA and RNA), to introduce these into host organisms and thus change the phenotype of the host organism.

(ii) Bioprocess engineering: Maintenance of sterile (microbial contamination-free) ambience in chemical engineering processes to enable growth of only the desired microbe/eukaryotic cell in large quantities for the manufacture of biotechnological products like antibiotics, vaccines, enzymes, etc.

Let us now understand the conceptual development of the principles of genetic engineering.

(i) identification of DNA with desirable genes;

(ii) introduction of the identified DNA into the host;

(iii) maintenance of introduced DNA in the host and transfer of the DNA to its progeny.

Now we know from the foregoing discussion that genetic engineering or recombinant DNA technology can be accomplished only if we have the key tools, i.e., restriction enzymes, polymerase enzymes, ligases, vectors and the host organism. Let us try to understand some of these in detail.

In the year 1963, the two enzymes responsible for restricting the growth of bacteriophage in Escherichia coli were isolated. One of these added methyl groups to DNA, while the other cut DNA. The later was called restriction endonuclease.

The first restriction endonuclease–Hind II, whose functioning depended on a specific DNA nucleotide sequence was isolated and characterised five years later. It was found that Hind II always cut DNA molecules at a particular point by recognising a specific sequence of six base pairs. This specific base sequence is known as the recognition sequence for Hind II. Besides Hind II, today we know more than 900 restriction enzymes that have been isolated from over 230 strains of bacteria each of which recognise different recognition sequences.

The convention for naming these enzymes is the first letter of the name comes from the genus and the second two letters come from the species of the prokaryotic cell from which they were isolated, e.g., EcoRI comes from Escherichia coli RY 13. In EcoRI, the letter ‘R’ is derived from the name of strain. Roman numbers following the names indicate the order in which the enzymes were isolated from that strain of bacteria. 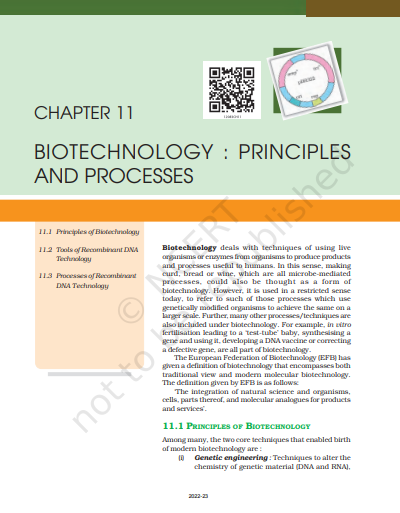 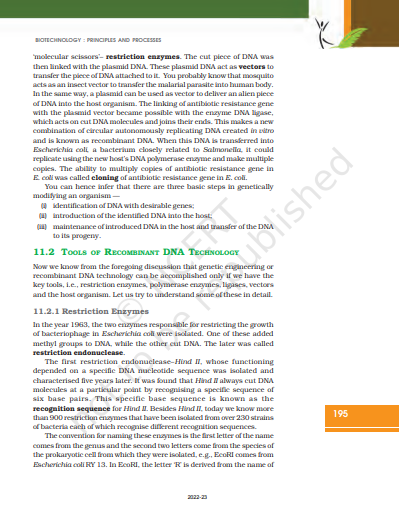 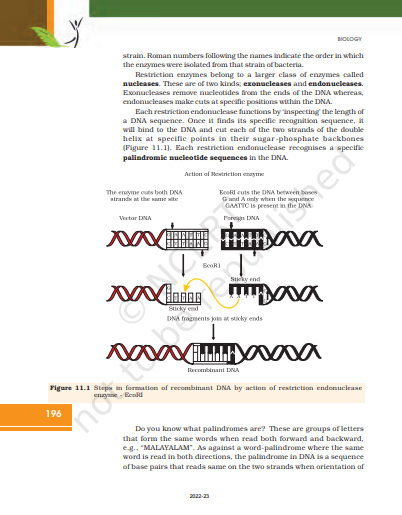 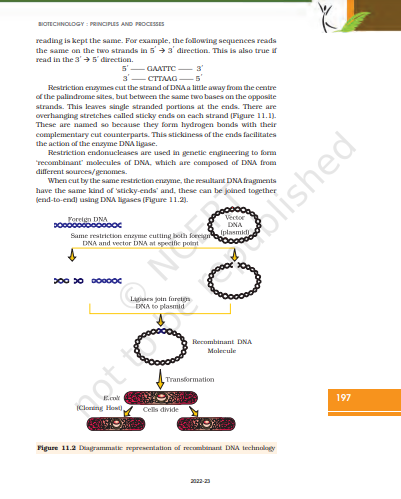 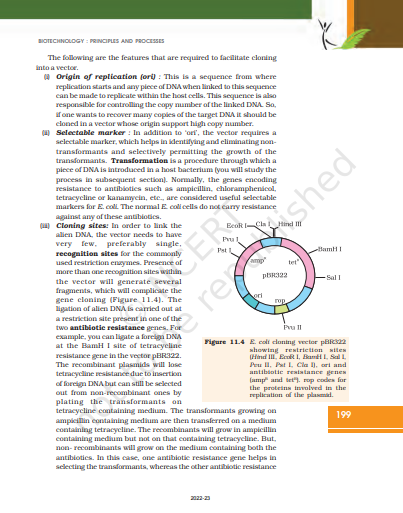 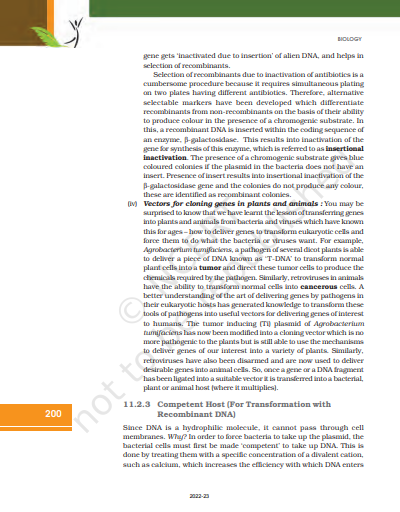 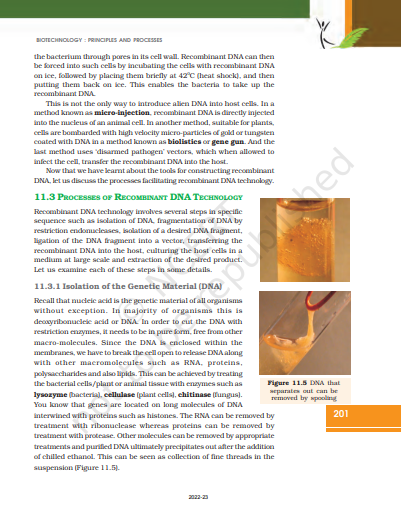 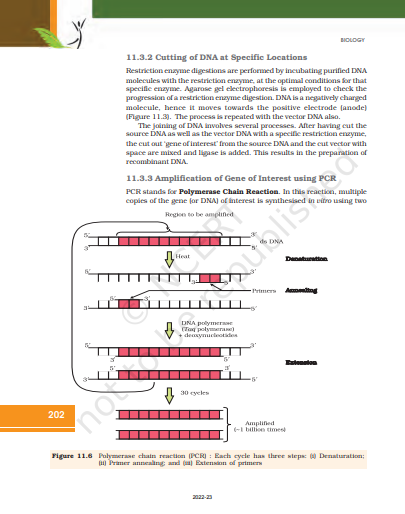 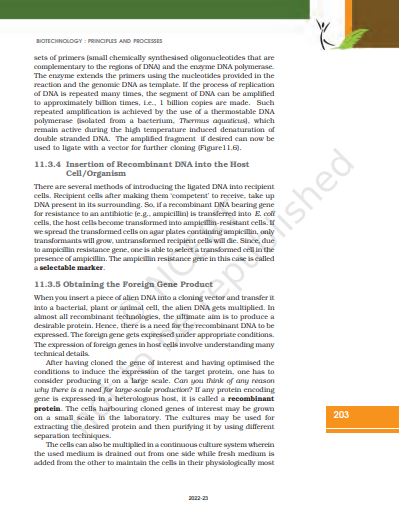 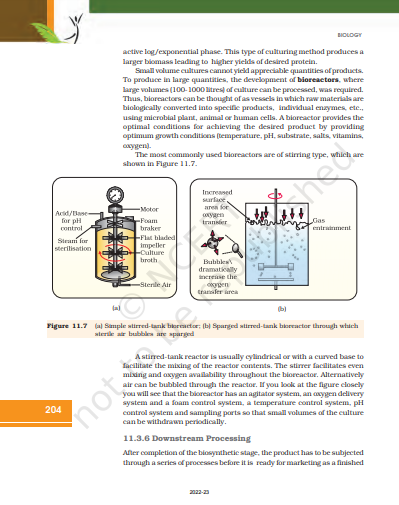 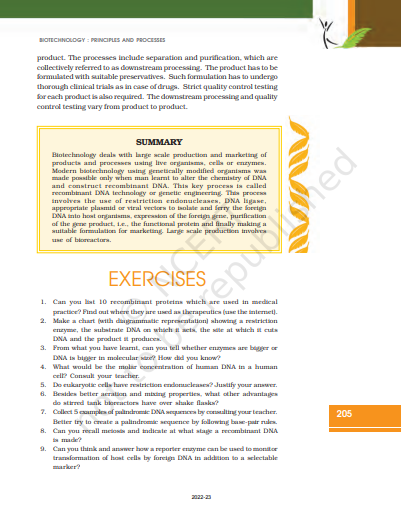 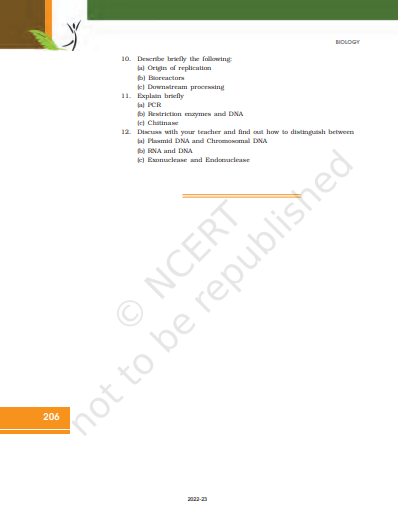 Safalta provides the latest NCERT course books for all the major subjects of Class 12. A team of proficient teachers drafts these matters in a precise and thorough manner. You can download the PDFs for all the subjects in a Chapter 11-wise format.

These Books are very effective in preparing for annual exams. Here is the PDF for NCERT Class 12 Books Biology Chapter 11- Biotechnology: Principles and Processes.

Where can you download NCERT Class 12 Books Biology Chapter 11 PDF?

Candidates can download NCERT Class 12 Books Biology Chapter 11- Biotechnology: Principles and Processes PDF for free on our page. Links are given below.

The Chapter 11 in CBSE Books for Class 12 Biology are vital for board exams and higher classes. Students should read the Unit given in the CBSE books for Class 12 Science. These stories and practice questions can help gain excellent marks.