Here is the information about NCERT Class 12 Books Biology Chapter 7. You can give a read to this blog and get PDFs of the subject.

Here, you can learn the NCERT Class 12 Books Biology Chapter 7- Evolution. Moreover, you can get the links for other Chapter 7 to download the links.

Evolutionary Biology is the study of history of life forms on earth. What exactly is evolution? To understand the changes in flora and fauna that have occurred over millions of years on earth, we must have an understanding of the context of origin of life, i.e., evolution of earth, of stars and indeed of the universe itself. What follows is the longest of all the construed and conjectured stories. This is the story of origin of life and evolution of life forms or biodiversity on planet earth in the context of evolution of earth and against the background of evolution of universe itself.

When we look at stars on a clear night sky we are, in a way, looking back in time.

Stellar distances are measured in light years. What we see today is an object whose emitted light started its journey millions of year back and from trillions of kilometres away and reaching our eyes now. However, when we see objects in our immediate surroundings we see them instantly and hence in the present time. Therefore, when we see stars we apparently are peeping into the past The origin of life is considered a unique event in the history of universe. The universe is vast. Relatively speaking the earth itself is almost only a speck. The universe is very old – almost 20 billion years old. Huge clusters of galaxies comprise the universe. Galaxies contain stars and clouds of gas and dust. Considering the size of universe, earth is indeed a speck. The Big Bang theory attempts to explain to us the origin of universe. It talks of a singular huge explosion unimaginable in physical terms. The universe expanded and hence, the temperature came down. Hydrogen and Helium formed sometime later. The gases condensed under gravitation and formed the galaxies of the present day universe. In the solar system of the milky way galaxy, earth was supposed to have been formed about 4.5 billion years back. There was no atmosphere on early earth. Water vapour, methane, carbondioxide and ammonia released from molten mass covered the surface. The UV rays from the sun brokeup water into Hydrogen and Oxygen and the lighter H2 escaped. Oxygen combined with ammonia and methane to form water, CO2 and others. The ozone layer was formed. As it cooled, the water vapor fell as rain, to fill all the depressions and form oceans. Life appeared 500 million years after the formation of earth, i.e., almost four billion years back.

Did life come from outerspace? Some scientists believe that it came from outside. Early Greek thinkers thought units of life called spores were transferred to different planets including earth. ‘Panspermia’ is still a favourite idea for some astronomers. For a long time it was also believed that life came out of decaying and rotting matter like straw, mud, etc. This was the theory of spontaneous generation. Louis Pasteur by careful experimentation demonstrated that life comes only from pre-existing life. He showed that in pre-sterilised flasks, life did not come from killed yeast while in another flask open to air, new living organisms arose from ‘killed yeast’. Spontaneous generation theory was dismissed once and for all. However, this did not answer how the first life form came on earth.

Oparin of Russia and Haldane of England proposed that the first form of life could have come from pre-existing non-living organic molecules (e.g. RNA, protein, etc.) and that formation of life was preceded by chemical evolution, i.e., formation of diverse organic molecules from inorganic constituents. The conditions on earth were – high temperature, volcanic storms, reducing atmosphere containing CH4 , NH3 , etc. In 1953, S.L. Miller, an American scientist created similar conditions in a laboratory scale (Figure 7.1). He created electric discharge in a closed flask containing CH4 , H2 , NH3 and water vapour at 8000C. He observed formation of amino acids. In similar experiments others observed, formation of sugars, nitrogen bases, pigment and fats. Analysis of meteorite content also revealed similar compounds indicating that similar processes are occurring elsewhere in space. With this limited evidence, the first part of the conjectured story, i.e., chemical evolution was more or less accepted.

We have no idea about how the first self replicating metabolic capsule of life arose. The first non-cellular forms of life could have originated 3 billion years back. They would have been giant molecules (RNA, Protein, Polysaccharides, etc.). These capsules reproduced their molecules perhaps. The first cellular form of life did not possibly originate till about 2000 million years ago. These were probably single-cells. All life forms were in water environment only. This version of a biogenesis, i.e., the first form of life arose slowly through evolutionary forces from non-living molecules is accepted by majority. However, once formed, how the first cellular forms of life could have evolved into the complex biodiversity of today is the fascinating story that will be discussed below.

7.2 EVOLUTION OF LIFE FORMS – A THEORY

Conventional religious literature tells us about the theory of special creation. This theory has three connotations. One, that all living organisms (species or types) that we see today were created as such. Two, that the diversity was always the same since creation and will be the same in future also. Three, that earth is about 4000 years old. All these ideas were strongly challenged during the nineteenth century. Based on observations made during a sea voyage in a sail ship called H.M.S. Beagle round the world, Charles Darwin concluded that existing living forms share similarities to varying degrees not only among themselves but also with life forms that existed millions of years ago. Many such life forms do not exist any more. There had been extinctions of different life forms in the years gone by just as new forms of life arose at different periods of history of earth. There has been gradual evolution of life forms. Any population has built in variation in characteristics. Those characteristics which enable some to survive better in natural conditions (climate, food, physical factors, etc.) would outbreed others that are less-endowed to survive under such natural conditions. Another word used is fitness of the individual or population. The fitness, according to Darwin, refers ultimately and only to reproductive fitness. Hence, those who are better fit in an environment, leave more progeny than others. These, therefore, will survive more and hence are selected by nature. He called it natural selection and implied it as a mechanism of evolution. Let us also remember that Alfred Wallace, a naturalist who worked in Malay Archipelago had also come to similar conclusions around the same time. In due course of time, apparently new types of organisms are recognisable. All the existing life forms share similarities and share common ancestors. However, these ancestors were present at different periods in the history of earth (epochs, periods and eras). The geological history of earth closely correlates with the biological history of earth. A common permissible conclusion is that earth is very old, not thousand of years as was thought earlier but billions of years old.

Here are the glimpses of the chapter- 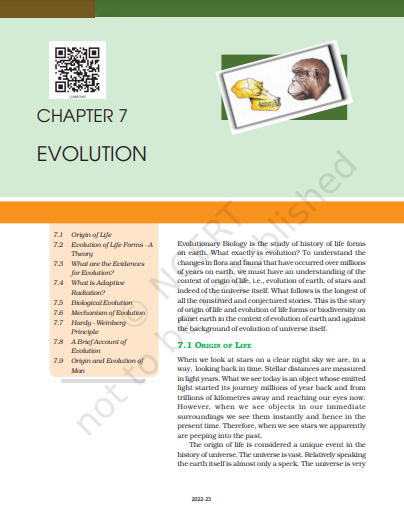 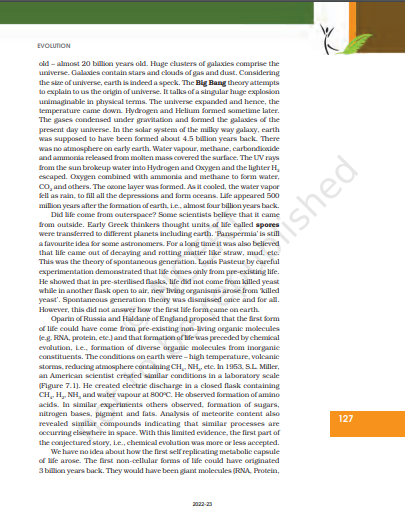 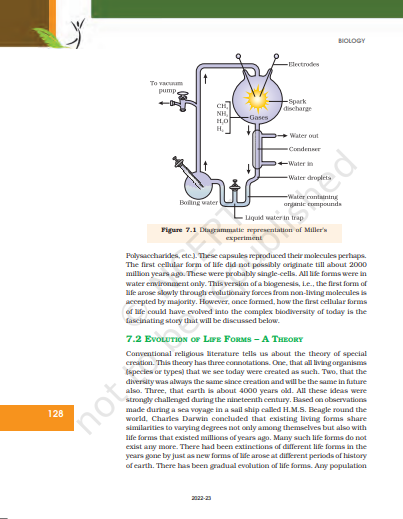 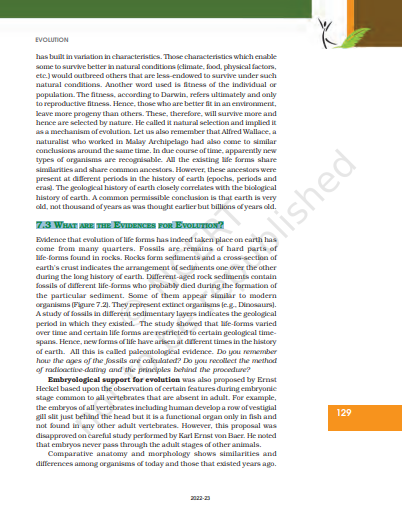 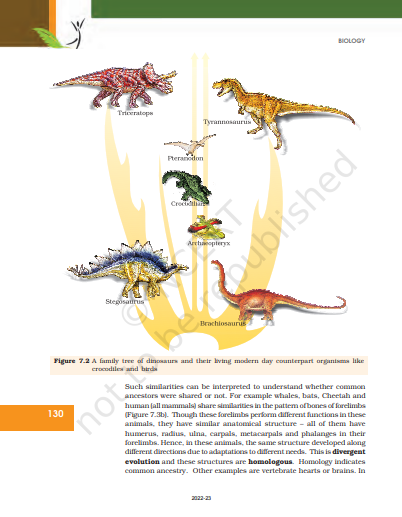 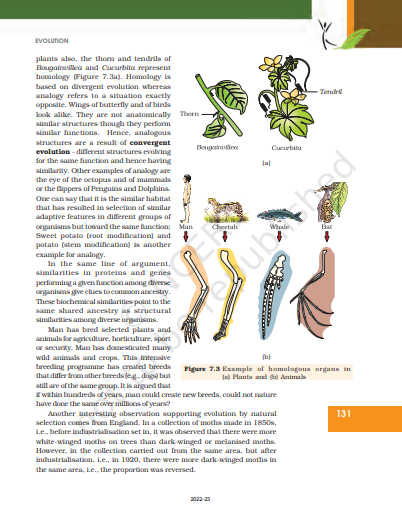 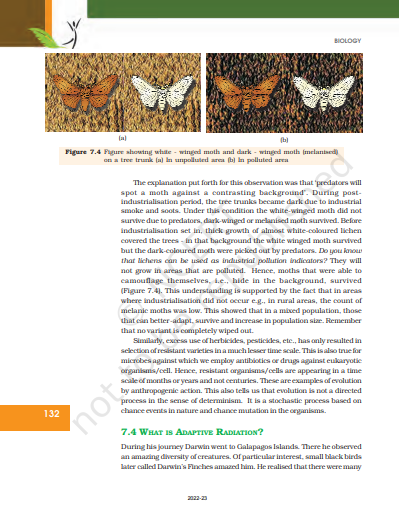 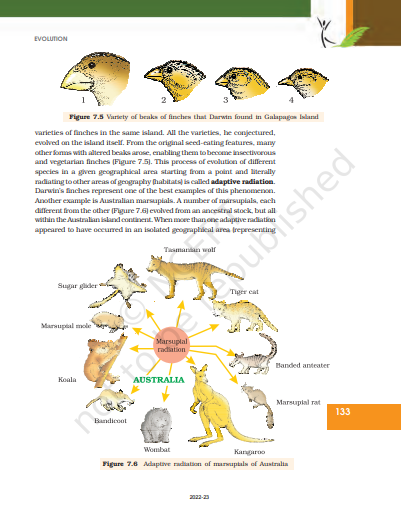 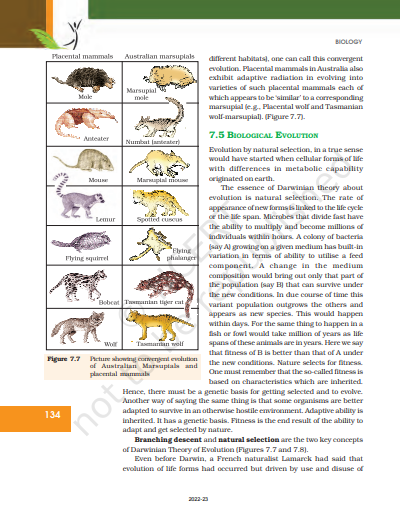 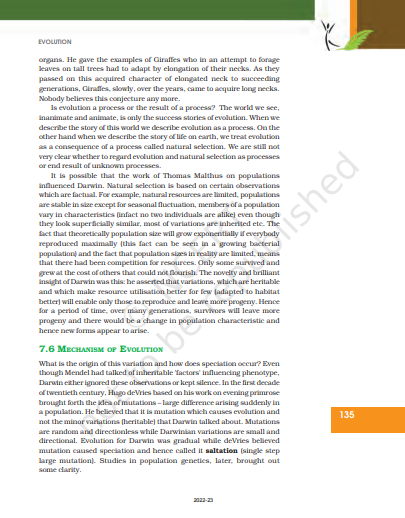 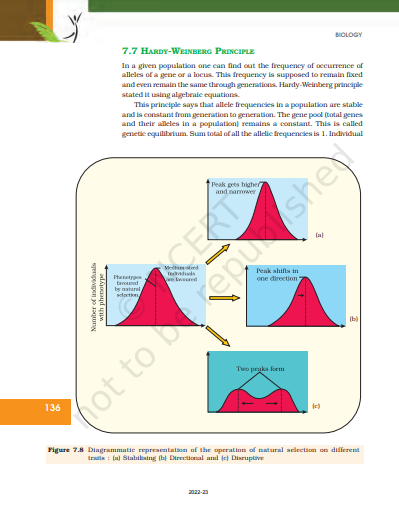 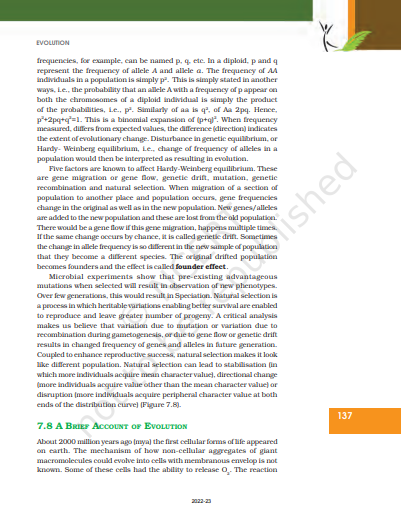 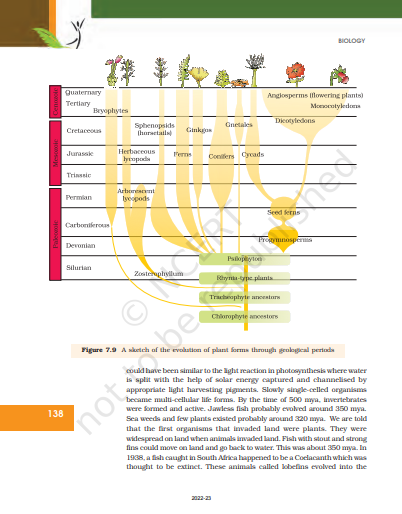 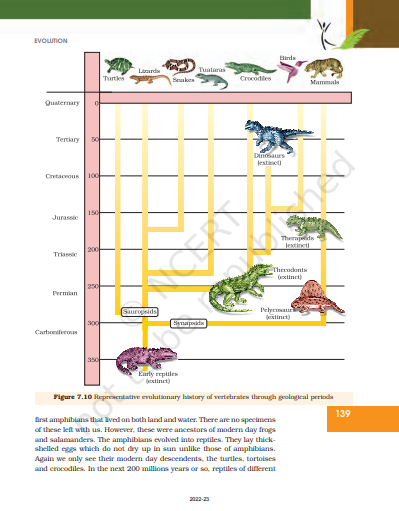 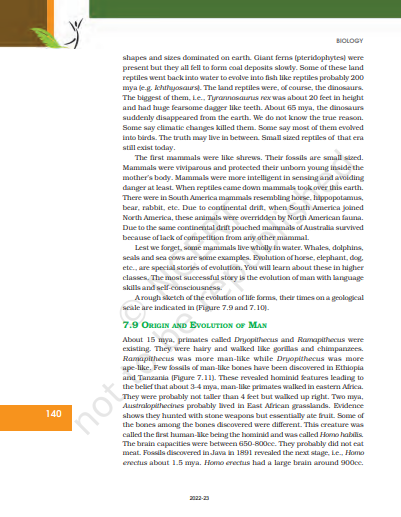 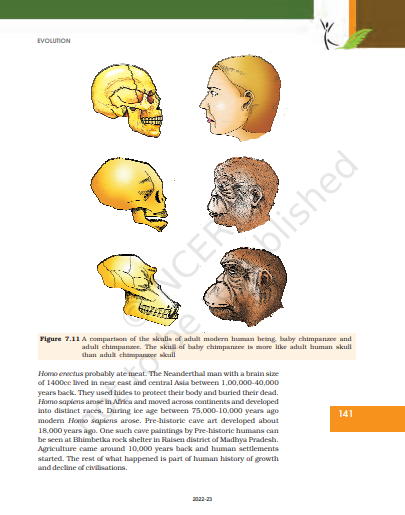 You can download the complete book from the link given below.

Safalta provides the latest NCERT course books for all the major subjects of Class 12. A team of proficient teachers drafts these matters in a precise and thorough manner. You can download the PDFs for all the subjects in a Chapter 7-wise format.

These Books are very effective in preparing for annual exams. Here is the PDF for NCERT Class 12 Books Biology Chapter 7- Evolution.

Where can you download NCERT Class 12 Books Biology Chapter 7 PDF?

Candidates can download NCERT Class 12 Books Biology Chapter 7- Evolution PDF for free on our page. Links are given below.

The Chapter 7 in CBSE Books for Class 12 Biology are vital for board exams and higher classes. Students should read the Unit given in the CBSE books for Class 12 Science. These stories and practice questions can help gain excellent marks.