Here is the information about NCERT Class 12 Books Chemistry Unit 8. You can give a read to this blog and get PDFs of the subject.

Here, you can learn the NCERT Class 12 Books Chemistry Unit 8- The d- and f- Block Elements. Moreover, you can get the links for other chapters to download the links.

After studying this Unit, you will be able to- The d-block of the periodic table contains the elementsof the groups 3-12 in which the d orbitals are progressively filled in each of the four long periods.

Please fill the name
Please enter only 10 digit mobile number
Please select course
Please fill the email
Something went wrong!
Download App & Start Learning
The f-block consists of elements in which 4 f and 5 f orbitals are progressively filled. They are placed in a separate panel at the bottom of the periodic table. The names transition metals and inner transition metals are often used to refer to the elements of d-and f-blocks respectively.

Originally the name transition metals was derived from the fact that their chemical properties were transitional between those of s and p-block elements. Now according to IUPAC, transition metals are defined as metals which have incomplete d subshell either in neutral atom or in their ions. Zinc, cadmium and mercury of group 12 have full d10 configuration in their ground state as well as in their common oxidation states and hence, are not regarded as transition metals. However, being the end members of the 3d, 4d and 5dm transition series, respectively, their chemistry is studied along with the chemistry of the transition metals.

In this Unit, we shall first deal with the electronic configuration, occurrence and general characteristics of transition elements with special emphasis on the trends in the properties of the first row (3d) transition metals along with the preparation and properties of some important compounds. This will be followed by consideration of certain general aspects such as electronic configurations, oxidation states and chemical reactivity of the inner transition metals.

Position in the Periodic Table

The d–block occupies the large middle section of the periodic table flanked between s– and p– blocks in the periodic table. The d–orbitals of the penultimate energy level of atoms receive electrons giving rise to four rows of the transition metals, i.e., 3d, 4d, 5d and 6d. All these series of transition elements are shown in Table 8.1.

Electronic Configurations of the d-Block Elements

In general the electronic configuration of outer orbitals of these elements is (n-1)d1–10ns1–2. The (n–1) stands for the inner d orbitals which may have one to ten electrons and the outermost ns orbital may have one or two electrons. However, this generalisation has several exceptions because of very little energy difference between (n-1)d and ns orbitals. Furthermore, half and completely filled sets of orbitals are relatively more stable. A consequence of this factor is reflected in the electronic configurations of Cr and Cu in the 3d series. For example, consider the case of Cr, which has 3d5 4s1 configuration instead of 3d44s2; the energy gap between the two sets (3d and 4s) of orbitals is small enough to prevent electron entering the 3d orbitals. Similarly in case of Cu, the configuration is 3d104s1 and not 3d94s2. The ground state electronic configurations of the outer orbitals of transition elements are given in Table 8.1. 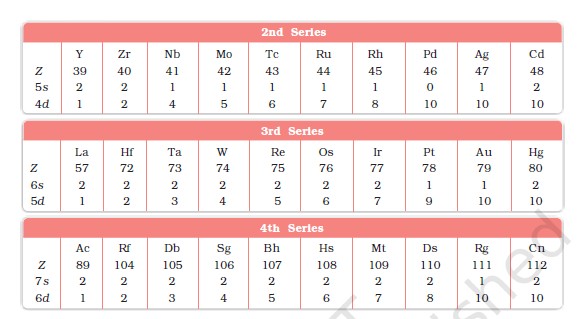 The electronic configurations of outer orbitals of Zn, Cd, Hg and Cn are represented by the general formula (n-1)d10ns2. The orbitals in these elements are completely filled in the ground state as well as in their common oxidation states. Therefore, they are not regarded as transition elements.

The d orbitals of the transition elements protrude to the periphery of an atom more than the other orbitals (i.e., s and p), hence, they are more influenced by the surroundings as well as affect the atoms or molecules surrounding them. In some respects, ions of a given dn configuration (n = 1 – 9) have similar magnetic and electronic properties. With partly filled d orbitals these elements exhibit certain characteristic properties such as display of a variety of oxidation states, formation of coloured ions and entering into complex formation with a variety of ligands.

The transition metals and their compounds also exhibit catalytic property and paramagnetic behaviour. All these characteristics have been discussed in detail later in this Unit.

You can download the complete book from the link given below.

Safalta provides the latest NCERT course books for all the major subjects of Class 12. A team of proficient teachers drafts these matters in a precise and thorough manner. You can download the PDFs for all the subjects in a chapter-wise format.

These Books are very effective in preparing for annual exams. Here is the PDF for NCERT Class 12 Books Chemistry Unit 8- The d- and f- Block Elements.

Where can you download NCERT Class 12 Books Chemistry Unit 8 PDF?

Candidates can download NCERT Class 12 Books Chemistry Unit 8- The d- and f- Block Elements PDF for free on our page. Links are given below.

Why is NCERT Books Class 12 Chemistry the best study material?

The book can also help in clarifying doubts. Other benefits of studying from the NCERT Books Class 12 Chemistry are-

Why is NCERT Books Class 12 Chemistry so recommended for board exams?

Are CBSE Books for Class 12 Chemistry important from an examination perspective?

The chapters in CBSE Books for Class 12 Chemistry are vital for board exams and higher classes. Students should read the Unit given in the CBSE books for Class 12 Science. These stories and practice questions can help gain excellent marks.