Here is important and relevant information regarding Class 12 Physics Concept of Basic Properties of Electric Charge? Read the article to learn about the same.

Electric Charge: It should be noted that charged bodies in a system of charges that are extremely close together are referred to as point charges according to the basic principle of Electric charge. In such bodies, all the charges dispersed over the surface of the material are assumed to be limited at a point. Usually, we need to deal with arrangements where the impact of such a system has to be considered. To calculate the ultimate result in such cases, we get to include and deduct these charges from one another. To make the involved procedures easier, it is required to study the characteristics of point charges. Here, in this blog, we will discuss three such characteristics; the conservation of electric charge, the Additivity of electric charge, and the quantization of electric charge. 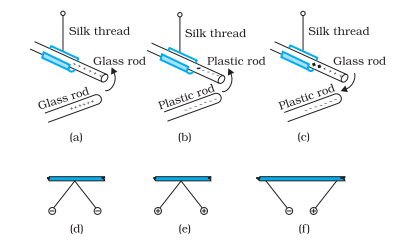 According to the law of conservation of charges, the charges are neither created nor destroyed; they are only dispersed from one body to another. For instance, when two materials, one material with some charge and the other with no charge are brought in contact with each other, the charge is dispersed from the object carrying some charge to be object-carrying no charge until the charge is equally transferred over the entire system.

Here, no charge is formed or displaced and is only dispersed from one carrying a surplus of charge to the other possessing a deficit.

Let us assume a system of charges consisting of three-point charges with magnitudes q1, q2, and q3.

In such a system, the total charge of the arrangement can be attained by algebraically including the three charges.

These charges have magnitude but no direction, are scalar quantities, and are treated like real numbers while performing any procedure.

Please fill the name
Please enter only 10 digit mobile number
Please select course
Please fill the email
Something went wrong!
Download App & Start Learning
For an arrangement, consisting n materials, the total charge of the system can be expressed as-

We consider the charge can be either positive or negative, and the process considers the sign of the charges.

According to the law of quantization of electric charge, all the free charges are significant multiples of the fundamental predefined element, which we represent by e. Therefore, the charge carried by an arrangement can be expressed as-

Where n is an integer (zero, a positive or a negative number) and e is the fundamental element of the charge, viz the charge possessed by an electron or a proton. The value of e is 1.6 × 10-19C.
Read More

Candidates can refer to the information regarding electric charge and its basic properties.

What is an electric charge?

The electric charge is the fundamental property of any matter that causes it to undergo a force when exposed to an electric or magnetic field.

How are electric charges categorized?

What is the SI Unit of Electric charge?

What are the characteristics of electric charge?

There are three characteristics of electric charge-

What is Safalta School Online?

Safalta school online is an initiative of Safalta Pvt Ltd to help students score well in their exams by sitting in their homes. We provide online lectures that are very beneficial for the students.

What is the fee of Safalta School Online?