Looking for the list of Ramsar Sites in India. Get to know about Ramsar Conventions, the latest edition to Ramsar List and other details here at Safalta.com.

If you are preparing for competitive exams and are looking for expert guidance, you can check out our General Knowledge Ebook Free PDF: Download Here.

What Are  Ramsar Sites

Ramsar sites are wetland sites listed under the Ramsar Convention which aims to conserve these sites. The Ramasar Convention entered into force in the year of 1971 via the International Treaty for the Conservation and Sustainable Use of Wetlands and was signed on 2 nd of February at a city in Iran called Ramsar. This year the World Wetlands Day, observed on February 2, celebrates the convention's adoption. Currently, there are approximately 175 parties to the convention. India Ratified the Convention on 1 February 1982. In 2018, there were 2,331 Ramsar sites on the list of wetlands of international significance, totalling more than 2.1 million square kilometres (810,000 sq mi). United Kingdom (175 sites) and Mexico (142 sites) are the nations with the most sites. With over 148,000 square kilometres of designated wetlands, Bolivia is the nation with the largest area (57,000 sq mi).

Ramsar Convention is an international effort to protect, conserve and ensure wise use of wetlands across the nations. Ramsar Convention is a nonlegal voluntary convention, that operates in close cooperation with the UN but is not part of the UN architecture. Ramasar Convention mandates two lists of wetlands i.e. - wetlands of International Importance and Wetlands Under the Montreux Record. Montreux Record refers to those wetlands where changes in ecological character have occurred, are occurring, or are likely to occur as a result of technological developments, pollution, or other human interference. There are two wetlands under Montreux Record as of now they are - Keoladeo Lake Rajasthan and Loktek Lake Manipur. The important thing to note is that- Rmasar also covers transboundary wetlands and the National Wetland Management Program identifies wetlands based on Ramsar Conventriosn Criteria.

Other Ramsar Sites In India
List Of Chief Of Army Staff 2022: Know About The Army Chiefs Since Independence! 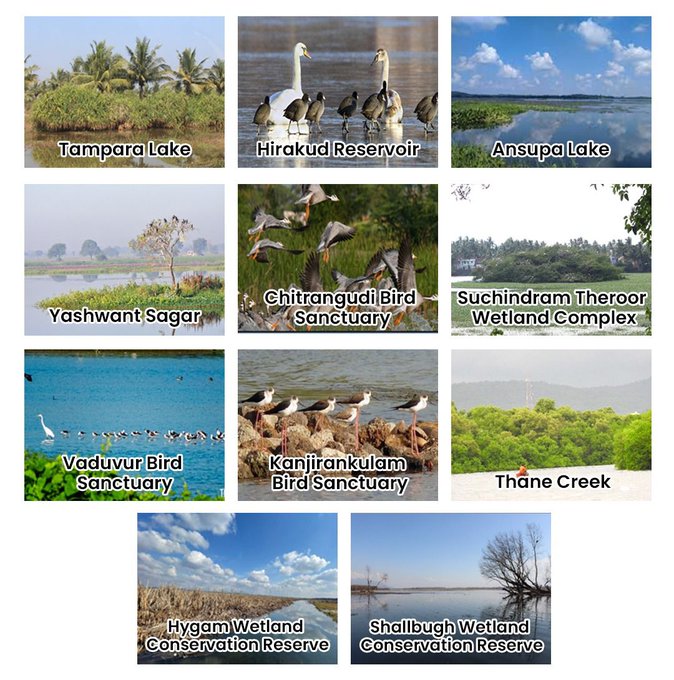 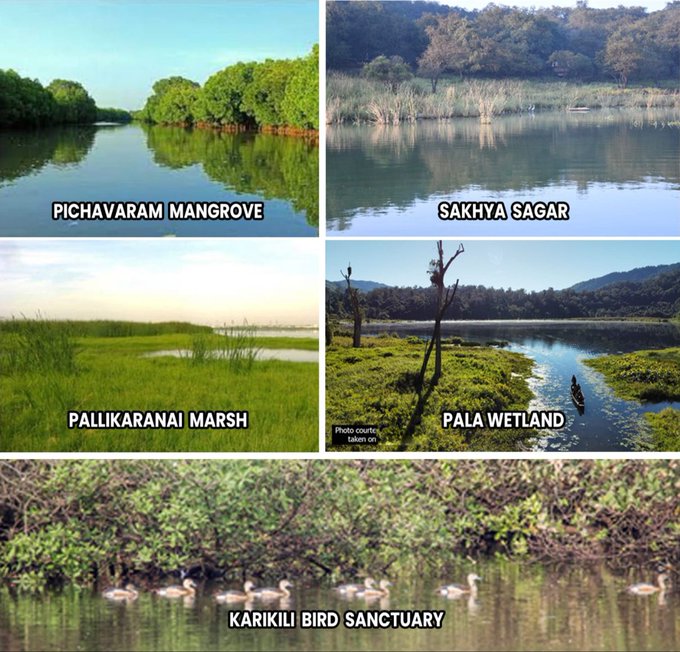 “Three pillars” of the Convention, the Contracting Parties commit to:

Most Important Ramsar Sites Other Than Sites In News

What is known as a Ramsar site?

A Ramsar Site is any wetland area that has been designated by the Ramsar Convention with the goal of preserving it and promoting the sustainable exploitation of its natural resources.
The Ramsar Sites are named after the Iranian city of Ramsar, where the International Treaty for the Conservation and Sustainable Use of Wetlands was signed on February 2, 1971.

The Ramsar Convention works closely with six other organisations known as international organization partners (IOPs). These are: These groups assist the convention's work by offering knowledgeable technical counsel, assisting with the execution of field research, and contributing funding. Additionally, the IOPs regularly participate in all parties' conferences as observers and full members of the Scientific and Technical Review Panel.

'IOP' To The Ramsar Sites


Convention works with the collaboration of the following organizations: List Of Padma Awards 2022: Know The Most Recent Recipients And Other Details Here

The Ramsar Convention on Wetlands of International Importance Especially as Waterfowl Habitat is an international treaty for the conservation and sustainable use of wetlands.

When did Ramsar Convention enter into force?

What are the IOP's to the Ramsar Convention?

The following organisations are IOP'S to the Convention:

How many Ramsar sites are in India?

India has a total of 75 Ramsar sites.

In which state highest number of Ramsar sites located?