List of Biosphere Reserves in India: Biosphere Reserves are there to  safeguard larger natural habitat areas than the typical national park or animal sanctuary. India currently has 18 biosphere reserves. These help in conserving the rich biodiversity that exists. They correspond to IUCN Category V Protected areas. India is home to diverse flaura and fauna which makes it very unique.

Candidates preparing for competitive exams must know about the different biosphere reserves in India. Read this article to check the list of Biosphere Reserves in India and other details.

There are 727 biosphere reserves in 131 countries, including 22 transboundary sites. They are distributed as follows:

The list is as follows: NDA vs CDS: Know the difference between CDS and NDA here 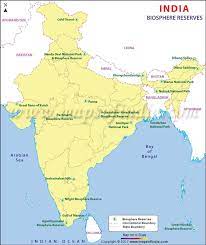 India is a signatory to the landscape approach backed by the UNESCO Man and Biosphere (MAB) programme, which serves as the guiding force behind the Biosphere Reserve Program. The Government of India has been operating a programme known as the Biosphere Reserve since 1986, in which financial support is given to the states of the North Eastern Region and the three Himalayan states in a ratio of 90:10 and to other states in a ratio of 60:40 for the upkeep, development, and improvement of specific items. The Management Action Plan is created by the State Government and is authorised and followed by the Central MAB Committee.

It is important to note that the essential methodology of biosphere conservation involves Man as the name suggests. Biosphere reserves look to integrate the local forest inhabitants for conservation and train them for scientific management of the area.

Which is the 1st Biosphere Resreve Of India?

The Nilgiri Biosphere Reserve was the first biosphere reserve in India established in the year 1986.

Which is the larget Biosphere reserve of India?

How many biosphere reserves are there in India?